Keijo!!!!!!!! also known as Hip Whip Girl is a manga that will soon premiere its adaptation to the anime/TV version.

Aquatic sports manga released two teaser videos for the upcoming anime, one in Japanese and one in English, which reveal that the anime will premiere in October 2016.

Don’t worry, you don’t have to take my word for it, the two versions are right down for you to enjoy.

I know many of you are hardcore otakus, so the version is Japanese is also featured. 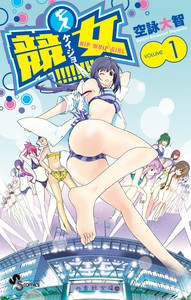 “Keijo” is a popular sport, but is not the kind of sport we are used to, is a gambling sport. The participants of this unusual sport stand on floating platforms just above water, and must use their chests and butts to fight each other with the objective of push the other down. “Only” their butts and chest must be used. No hands, legs or heads can be used to fight.

Nozomi Kaminashi, a high school student, desires to be part of the sport after she graduates.

As she grew up training gymnastics, which gave her the advantage of great flexibility and balance, making her a good candidate for such sport.

After high school, Naomi decides to join a boarding school that will train her in Keijo.